Skip to content
There’s no doubt a Sahara desert tour is the quintessential Moroccan travel adventure, but sometimes discovering the authentic Morocco means getting out of the car, getting your feet on the ground, and allowing yourself the joy of encountering daily life. Consider the relationship Moroccan people have with animals. Few people keep pets of any kind in Morocco; they neither have the space nor the resources. Dogs in particular have a somewhat ambivalent place in Morocco, because they are seen as unclean by the stricter interpreters of Islam. As well, there are few enough parks where people might spend their leisure (also a scarce commodity) – don’t even imagine “off-leash” areas. Well… maybe I should reframe that. You could consider Morocco to be entirely off-leash for animals, because there are zillions of free-range cats and dogs everywhere in Morocco. They’re largely accepted as members of the community, and tended to in a loose sort of way. Take for example the little kitten we found wandering on the side of the highway one day, destined to be road kill within the hour. We took it with us to the next village where we bought it some milk at a roadside equivalent of a convenience store. A few local people came over to see what was up: Strangers in a Big Car stopping in their little village was a signature event. They were delighted with our little hitchhiker (and also for our gesture), and for a few more dirhams, agreed to take over its care. Even in the urban environment, most cafes have their feline familiars. Wait staff go through the motions of shooing them away, but they never go far: they also just go through the motions of beating a retreat. The cats also quietly go about keeping rats at bay. That’s saying something, considering the challenge to garbage management in Morocco, which in a way, has a connection to Islam. It’s forbidden to waste things, especially food. So, in every neighborhood, there are dumpsters placed strategically on street corners or empty lots, and residents take their garbage to these containers for approximately-weekly collection. However, if people have unwanted food, and especially leftover bread, they leave it BESIDE the dumpsters “for the animals”. …Yes, that does mean that the animals tear through it (as do the desperately poor), and so there’s often a general mess around most of the dumpsters – a veritable rat buffet, one would think. But, I’ve never seen a one. There are other subtle signs of soft-heartedness towards animals. I went for a walk through a new-to-me neighborhood in Marrakech, and spotted this “care station” for the animals: tucked in the small space between two buildings, someone created a little water and food station for the neighborhood dogs and cats. The picture is poor, but it never fails to make me smile to think that someone is aware enough of the challenge the animals face in finding water in particular. So here’s my photographic tribute to the Maroc-cats! They’re so-o laid back… they’ve claimed their space, know their place, and have a way of letting you know that you’re the guest in a way only cats can. 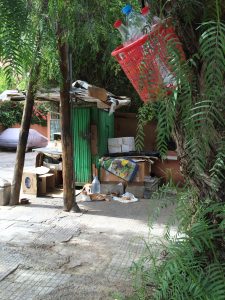 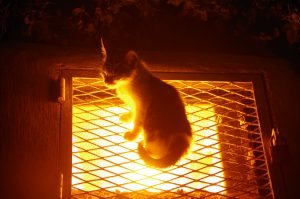 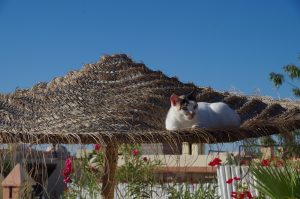 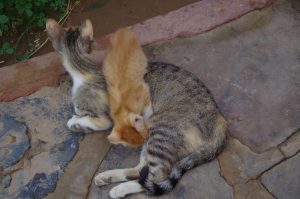